This content has been written a long time ago. As such, it might not reflect my current thoughts anymore. I keep this page online because it might still contain valid information.

A year ago, Julien, Pierre, Manuel, Jean-Philippe, Julien (yes, again), and I created Clermont’ech, a non-for-profit organization which aimed at gathering developers in our lovely city. We decided to organize conferences every two months, the so-called API Hours.

My first conferences as an attendee were Symfony Live 2011, and the ParisJS events when I was living in Paris. That was an eye-opener! Back to Clermont-Fd (my place), I talked to some of my friends about the idea of organizing conferences here, between the volcanos. Unfortunately, we were all quite busy, and nothing happened. This was in 2011.

Then, I moved to Switzerland, where I learnt what simplicity and freedom were: Wanna do something? Well, just do it! In other words, if you never try you will never know. Back to my place again, I then met Julien who wanted to build a Python community: 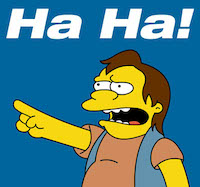 Yeah, there are not a lot of Pythonistas here. However, there are PHP, Java, .NET, JavaScript guys. Hence the idea of not being focused on a single technology or programming language, but rather, targeting developers at large. That is how Clermont’ech is born, exactly a year ago. Julien was really a catalyst, and it was the right moment I guess. We discussed the idea with the LavaJUG guys (Java User Group), the first local tech organization, and they helped us a lot, giving valuable advices.

The first thing we did was to all agree on a manifesto with four strong values:

A year later, I think that this was our main key success factor. We always stick to this manifesto, we had a clear vision since the beginning, and we all shared the same point of view.

Then, we tried to create our own identity, and we choose the platypus as our mascot. Why? Because, platypus are cool, and will always be cool. End of story. A special thanks goes to Sophie, our outstanding web designer, by the way.

First event was awesome, while we had no money, no experience in organizing an event, only a MacBook Pro, and a camera. We got more attendees than expected, quite unbelievable. Next API Hours went well, and we reached our limit of 50 attendees after the second event. The idea behind limiting the number of attendees was pretty straightforward: we wanted people to meet other people, and make the events more friendly. 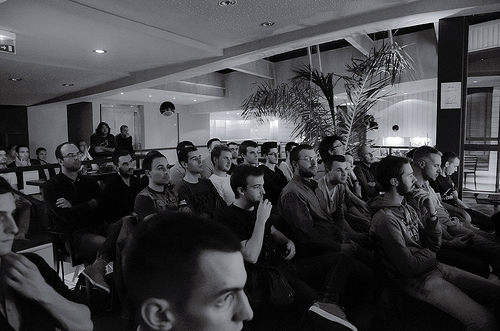 We were more and more prepared, with more equipement, and a lot of goodies! That is probably the second key success factor: focusing on the marketing stuff. This led us to the notion of sponsorship, i.e. money. Since the beginning, we wanted our events to be free of charge for the attendees, but also, providing food (we are French afterall). Thanks to our fabulous sponsors, we were able to do more, making t-shirts, stickers, business cards, postcards, but also chocolates! 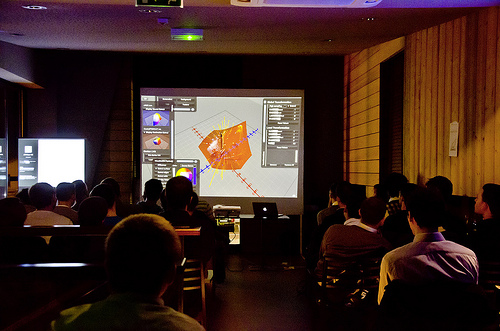 We held the events in different places, and not always the same day of week, so that we allowed new people to come. We took care of a lot of similar details (e.g. food for vegans and non-pork eaters, live streaming for those who didn’t get a ticket, and many more you can’t probably think of). 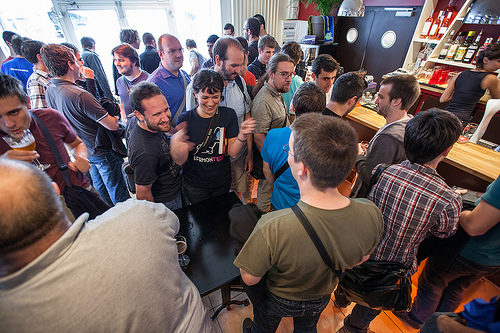 But, conferences without speakers are nothing. We wanted the API Hours to be community-driven, and that is why we decided to find speakers locally. Most of our speakers never spoke at any conference before, but they were all good!

Thanks to these events, I met a lot of interesting people, and not only developers, but I also heard about topics I would not have explored myself. We built a community of ~130 people (based on our mailing-list), all involved in computing. I think we are quite well-known now, since local universities asked us to come and speak to their students. 2014 is going to be amazing, we have a lot of new plans to make things even better!

If you don’t have any tech organization in your place, consider building your own! It is worth doing it, and a fantastic adventure!

Sorry, I removed all comments on December 19, 2019. You can reply to this tweet or send me an email if you like.