Many folks are familiar with the concept of feature toggles (also known as feature flags) but they do not necessarily use them because <insert reason here>. This is a very powerful technique that allows teams to ship new features and/or experiments in a controlled way. My team uses different flavors of feature toggles on the AMO platform, and that is what I am going to describe in this article.

The AMO server-side is mainly powered by a Django application and we are using Waffle to implement the different feature toggles. Waffle has three types of feature flippers: flags, switches and samples, depending on the needs. I am not very familiar with the last one, which seems to be a better packaged version of rand(), so I’ll only introduce the first two flippers.

Flags are probably what most people have in mind when thinking about feature toggles. They are convenient to roll out features according to various conditions, like specific users or percentage of traffic.

My team uses flags to progressively enable new features in production. This can be useful when the feature can only be fully tested in production, e.g., because it is not possible to set up a realistic (enough) environment or it has privacy implications. Flags can certainly be used for other purposes but I am mainly familiar with these ones.

This is how I shipped the new usage statistics on AMO to end users earlier this year for instance. That was handy to iterate quickly and give early access to Quality Assurance (QA) folks, Project/Product Managers (PMs), and key users (in this case, developers of very popular add-ons to measure the performance impacts). Later, we updated the flag configuration to perform a rollout (25/50/75/100%). During this rollout, users got access to a “beta mode” (the new feature I was working on) in addition to the legacy feature but it does not have to be this way.

It is also possible to use a toggle to change a feature entirely for everyone, and that is the strategy I used for the download stats on AMO lately. This is useful to preview a feature without risking a production incident!

Being able to turn a feature on and off for everyone in production can also be achieved by a switch. Switches cannot target specific users or things like that, but it is what we use the most on AMO.

For example, we have switches that act as emergency switches to quickly react to potential outages in production. Our kinda monolithic server-side application talks to some smaller services and if one of them goes crazy, we can quickly shunt it so that it does not take the entire platform down.

We also use switches to change parts of our application that run in the background like cron jobs or asynchronous tasks. In the case of the new AMO statistics, I used switches to change the data source of the tasks that compute particular values (e.g., average daily users, etc.). After having tested the new behavior in our non-production environments, we turned the switches on in production at a given time and we monitored the first executions.

Similar to flags, switches are great to ship big features incrementally and allow long periods of tests in non-production environments. That way, we can detect and fix most issues early, preventing disasters when we go “live”.

We do not have the exact same concept in our main frontend application, but we do have some sort of client-side feature toggles. We came up with a convention to implement switches on top of node-config and our very own client-side implementation for it. We use frontend switches quite often so that QA can verify the changes before they are deployed in production. In addition to that, we can start conversations with PMs and User eXperience (UX) people while we are implementing the changes.

Our feature flipper implementation may appear naive, it works great for us. We shipped new pages, homepage redesigns, and other minor features behind such switches. That being said, this approach is not as flexible as its server equivalent because it requires a deployment to update the values of the switches.

How do we test our code?

Django Waffle stores its configuration in the database and provides helper functions to create flags or switches in a test case. We usually write similar tests with the feature toggle enabled and disabled.

Most of our frontend code is written with React. We use a pattern that consists in passing a _config prop whose default value is the actual node config and we override it in the test case with a fake config object. That way, we can unit test all possible conditions:

When adding a new behavior behind a toggle to an existing feature, we usually update the test suite to work as before and we add new test cases for the new behavior. This often implies the addition of very similar test cases but it is not so bad as we always plan to delete some code later on.

A note on code quality

Every time we introduce a Waffle flag, a switch or a frontend toggle, we file a GitHub issue to clean up the code once there is no need for it anymore. If the author forgets about it, this is usually raised during the code review. This is how we mitigate the risk of having spaghetti code. Some toggles (like emergency switches) are more permanent, though.

In the server codebase, we delete the Waffle flag or switch using a database migration, then we remove the old code (including the toggle) and we update the test suite accordingly.

I created a Firefox extension called “amo-info” to display various information about the public-facing part of the AMO platform. Among other things, this extension shows the configuration of our frontend toggles to quickly see which features are enabled/disabled in our different environments: 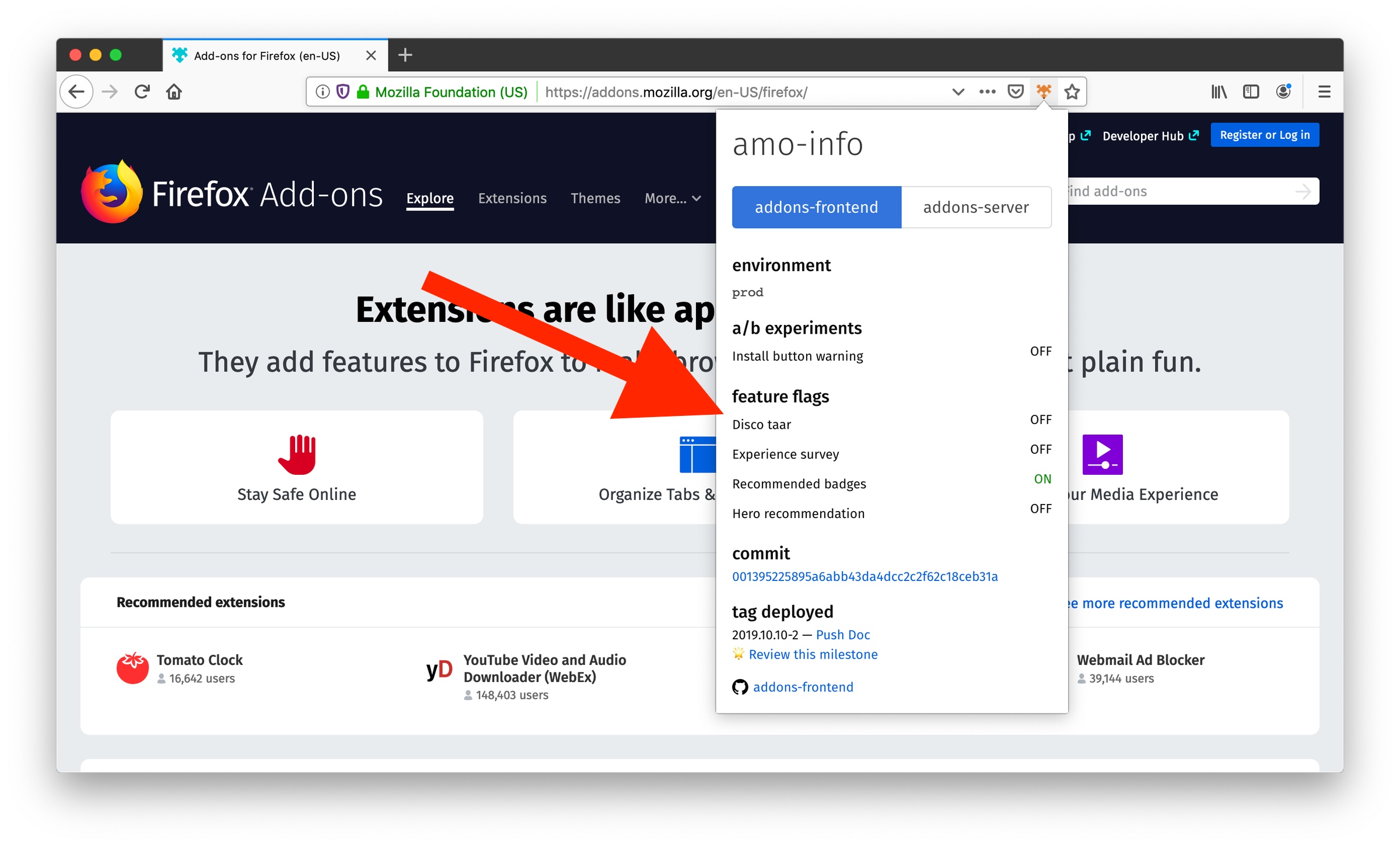 That’s it for today :-) Are you using feature toggles too? I’d be interested in knowing how you manage them and what you do differently than than we do. Don’t hesitate to get in touch!

Sorry, I removed all comments on December 19, 2019. You can reply to this tweet or send me an email if you like.